Where You Can Buy The Best Ninja Swords?

If you are a martial arts buff, you probably don’t need any introduction to ninja weapons. Thanks to the influx of Kung Fu films and Bruce Lee, the influence of martial arts is pretty solid in the United States. And with that, the fact that ninja weapons are still a great deal is not a shocker at all. Within the large umbrella of all the ninja weapons, swords are definitely one of the most famous ones as well. Ninja swords are sleek and have an amazing ancient history attached to them. Real fans of ninja martial arts have a liking for the amazing swords that are made in the same ancient principle. If you are an admirer as well, you probably like collecting and owning awesome ninja weapons, including swords. But if you are wondering, where you can buy the best ninja swords, online stores are the best place, hands down. You can find multiple antiques in some pawn shops, but they are pretty expensive. To get the best ninja swords that are also affordable is only possible online where there are more options and competitive prices.

Knife Import is the answer to all your ninja weapon obsessions. We are not only one of the few online stores in the country to stock and manufacture authentic swords, they are also light on your pocket. You can check out our collection online and find real swords crafted with quality and grace. The true mark of a ninja sword is sleekness, sharpness, and design and that is what we have in all the swords we sell. If you are a martial arts buff, you don’t need convincing, but for the rest of you, let's dive into the world of ninjas and see what the fuss is about.

The Special Something About Ninja Weapons Need-based Invention

The first thing that we can confirm about most ninja weapons is that they were all smart inventions. Unlike many weapons, these were not mass-produced, sophisticated artillery that was available all the time. Ninja weapons, for the most part, were invented because of the ruthless military Samurai rule in Okinawa, Japan in the 12th Century. The Island of Okinawa was overtaken by the Japanese military and civilians were banned from using weapons. To protect themselves, simple farmers and civilians fashioned weapons for self defense out of everyday items. The second group was mercenaries and agents who fought this powerful army, but stealthily. To keep themselves as discreet as possible, they invented weapons that were useful to fight with discretion and stealth. Shorter swords, daggers, staffs and other devices were created to protect against the tyrannous rule.

There is an actual branch of fighting techniques used in Guerilla warfare. This comprises a group of people who fight against the status quo with specialized techniques and weapons designed to combat more powerful groups. Guerilla warfare was common in many conflicted territories, including Japan, where ninjato, the art of ninja fighting, was established and grown. This specific kind of martial arts focuses on the environment, agility and action with stealth as the main objective. Ninjato techniques are still considered one of the most difficult and refined ways of fighting anywhere in the world.

Compared to most weapons, ninja weapons are actually one of the simplest and most basic weapons. They are contraptions made with innovation and creativity at the center of everything. Since all these weapons were created to battle a powerful enemy, simplicity was the right way to tackle them. Keeping the fighting objects simple and plain meant they were combined with willpower and inner strength. Regardless of how long it's been since the invention of such weapons, that ideology means they will work in any time period for any cause. These weapons are rooted in the idea that they will rely on abilities you can cultivate and hone over time, not just technicality and complicated operating systems. They might have been refined over time, but their essence is still the same as it was centuries ago.

What Are Real Ninja Swords Worth Now?

There are two types of people who still admire and buy ninja swords, aspiring martial artists and collectors. You will find both of these parties looking for the best swords they can find to make sure they have quality as well as history melded into one. If you are any of these people, ninja swords really are a treasure to you as they should be. For many people, it is hard to imagine they are in fact manufactured and sold in multiple stores all over the United States. They are used in martial arts institutes in advanced classes and most of them are bought for display and collection. Whatever the reason might be, ninja swords are actually still made with the same quality and finesse as they were years ago.

Nowadays, a classic antique ninja sword can cost you a couple of hundred dollars and more. If you are looking for real, historic stuff, you might have some trouble finding as many options. But at Knife Import, you will find a variety of ninja weapons you have never seen before. We actually stock one of the most exquisite and qualitative collections of swords, with a pleasant advantage – low costs. Unlike the antiques, you can actually find replica authentic pieces in our store that look and feel the same. You can get the most beautiful and classic ninja swords for sale here for as low as 50 dollars.

For the wholesale price of $16, you can get the 2 Piece Ninja Sword Set with Cast Metal Guards and Pommels. This is the kind of sword made for training for aspiring martial artists. You can practice proper technique with this sword and kit without having to compromise on your experience. If you are a collector, the Full Tang Secret Agent Fantasy Sword is the sleek addition you’d love to make to your sword collection for just $10.28. Visit Knife Import and find swords that can dazzle and aspire. 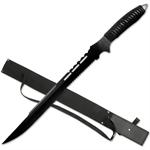