What, When and How – The Complete Evolution of the Bo Staff

Can it be possible that a seemingly useless stick of wood can be made into an incredibly handy weapon to fight crime and defend oneself? Surely, if that stick is a well-made Bo Staff, it can not only be a useful weapon but is also a great tool to train your body in agility and reflexes. But the history of this simple staff weapon dates back centuries and has quite the humble origins that would seem even less fabled.

In the military rule of Okinawa, Japan, there was a blanket ban on all weapons for the general public, who then became threatened under the Samurai soldiers' mercy, with nothing to protect themselves with. Eventually, they started improving their everyday objects into possibly viable weapons to help create a personal defense.

A typical wooden staff was used by farmers of the island to transport and carry water up and down the hill, herd the cattle and use as hiking sticks; these staffs were fashioned into tapered and straight fighting sticks that could tackle anyone who attacked or came to close, to ensure for self-defense. As it is also known, this bo staff or bow staff became increasingly popular among the civilians as protective weapons to help encounter the Samurai attacks.

One of the best things about these bo staffs was that they were often long and quite bendy, so they were ideal for blocking the strike and thrust someone from a distance, especially a knife or sword-wielding person. When there were no weapons allowed for personal safety, the everyday Bo staff became an excellent weapon that relied on senses and strength rather than lethal methods to counter attacks and assaults.

Nowadays, there are various aesthetic and highly technical weapons available worldwide, and in the United States, but this little humble weapon that originated in the civilian highlands of Central Asia has prevailed as a preferred weapon even now. Why would that be? Because there is no need to fix what's not broken, the simplistic bo staff has proved to be a potent tool in training various martial arts fighting techniques. General weapon enthusiasts have also used it to train in self-defense and agility.

There are hundreds of variations of how people use martial arts staff nowadays. There are quite a lot of different Bo staffs you can find online and in weapon stores that will make for great training weapons and self-defense tools, You might wonder how a simple staff can help protect someone against something like a gun or a knife, but if you know the proper technique of using a bo staff, you can easily defeat anyone who tries to attack you or hurt you. Here are a few ways that the staff weapon is still used and why it is effective;

Since the bo staff is ideal for blocking attacks, this technique allows the carrier to only use one hand, another to balance themselves, and make an alternating ring around themselves using one arm, first swinging the staff to one side, then the opposite one swift straight swinging motions.

The staff is slim and can cause pain if thrust right at someone. That is why if you have managed to know down your opponent with a spinning staff, you can then station your hands across the staff, bend and tilting the staff down at a 45-degree angle, thrust into your opponent with force, rendering them unable to move too much and in pain.

Many of the martial arts weapons that you see being used today and the ones that have been popularized over time are all in use because they address the basic need of training your body to be more toned and active, and they are made to fight all kinds of different attacks. The bo staff was a defense against the sudden attacks, usually from people who had swords and knives.

Many bo staff fighting techniques that you will come across will be of saving your head, neck, and the area around you against any strike and blow. Of course, this requires a great presence of mind. Still, the weapon itself is as simple as possible, so more energy can be used in using it correctly and effectively instead of worrying about managing the body or the technicality of the weapon.

Where to Buy a Bo Staff for Training and Personal Defense?

Even in simple combat demonstrations that involve different martial arts techniques, many moves are taught using bo staff weapons to improve upper body strength and reflexes. That also includes sourcing the best bo staff you can find to ensure that your training is done with the right tools.

It is not hard to find a bo staff for sale as it is a staple weapon in martial arts training and self-defense fighting demonstrations. They are readily available in weapon shops across America and widely in Central Asia. Still, a large population is interested in martial arts, and hence these staff weapons are basically stapled sports equipment.

While there are many variations of this simples martial arts staff available in the market, experts usually gravitate towards the most dependable and classic option: the wooden bo staff. There are some distinct qualities of wooden staffs for sale that you can get to authenticate the experience as well a train with the best version of the weapon, such as:

Rattan wood is abundantly available in Central Asia, and hence it is the oldest form of wood used to fashion bo staffs for personal defense. It is slim and quite sturdy despite being thin. It is quite bendy and ideal for using inflexible fighting postures and moves like strikes and spins that require more movement.

Another popular wood used to make the best bo staff is oak wood. It is one of the strongest wood you can find anywhere globally, and a wooden staff made out of oak wood guarantees durability and great strike and thrust. It is used for blocking as it can endure greater pressure and help protect vulnerable parts of your body.

There are several designs of bo staffs made specifically for use in different fighting techniques. This particular one is a thinner and sleeker version of the classic bo staff; it is carved and chaffed into a slim and needle-like stick perfect for poking and thrusting techniques. The stick's thinness enables a better grip and greater speed when spinning the staff for blocking and striking.

One of the reasons that bo staff became so popular even in the modern world is that they are made from cheap raw materials that are readily available worldwide. So people prefer to use them as balancing and body enhancement tools and amateur and professional weapons. But due to their cheap manufacturing costs, they are also quite affordable to buy. Starting from a mere $9.99, even elaborately carved bo staffs would also only cost as high as $20.99 at most.

They are easily replaceable, but they are usually so durable and handy that you rarely need to replace them, and they have no additional maintenance. You don't need to buy any additional gear for them, no cases, no bullets, or harnesses, and they can be placed anywhere you want since they are unaffected by weather mostly.

The normal price for bo staff is a very suitable price for trainees and professionals because investing in more expensive weapons also requires learning how to handle them and keep them safe. But bo staff weapon is also quite favorable due to its non-threatening nature. Bo staffs are quite indistinguishable from regular walking sticks or decorative staff, which is why they are ideal for keeping at home as emergency self defense weapons against intruders or robbers.

Furthermore, they don't draw suspicion, which is why they are good weapons to carry on trips, especially on wilderness expeditions, as they are multi-purpose sticks that work as hiking sticks and as handy weapons all in one. Knowing how to work with a bo staff is an added advantage that will never waste and really help you in bad situations. 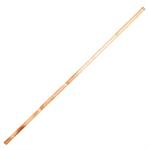