The Perks Of Carrying A Self Defense Weapon

As the saying goes, when you’re out of oxygen, put your mask on first before others. Even though in threatening situations, you might need help from the police, it's better to be prepared yourself as well. The best part about carrying self defense weapons is the confidence to be where you want without forethought. Sure the legal system is there to protect you, but helping yourself feel safer is also a great service. In the recent patterns of street crime and self defense, one of the most effective weapons is a stun gun.

While there are more heavy-duty weapons most people prefer, a stun gun is a perfect weapon. It is easy to use and is effective for a range of threats and unsavory situations. When you have a weapon on you, it should be simple and fast-working so you can save precious time and precious lives, including your own. Moreover, tackling any street crime with a stun gun is much more effective than anything that requires force or initiative. Where You can exert yourself trying to ward off dangerous people, saving yourself and escaping is usually smarter.

How Does A Stun Gun Work?

There is a proper mechanism behind the effectiveness of stun guns. They are primarily electroshock weapons, which generate high voltage electric current. The device usually has a button to turn it on or a push and use the system. The moment you push the button, it creates a powerful surge that can electrocute someone really badly. It can cause temporary muscle disruption, stupor, aches and can affect your mobility for a little while. The electric current is enough to deter someone who is trying to harm you physically. The effect lasts long enough for you to get away without any kind of altercation or issues.

The second major feature of the stun gun is the current producing system. In one stun gun, you will get the projectile system, which is when wires shoot out of the stun gun and clip into a person’s skin. This shooting stun gun is often also known as a taser. The more generic form of stun guns is the one you have to push against the body for it to work. This stun gun usually has tongs or nibs that produce a high-voltage current that can shock someone pretty badly. Almost all stun guns are either battery-powered or are rechargeable, but of course, wireless to carry around.

Using A Stun Gun In Emergencies

It's pretty obvious that self defense weapons are meant for certain kinds of issues and instances. They are not the kind of weapons you can use in a military setting to fight or combat. Instead, they are meant for regular people to feel safer when they are in trouble. Stun guns are specifically good to use in cases of harassment, pursuit, assault, or kidnapping. Since it causes muscle disruption, it is much more effective in being used against a violent person. Wherever you anticipate physical harm, stun guns can work really well, but there are different ways to use them.

If you are being chased by someone and you fear something worse happening, using a taser will work better. As opposed to a close-range stun gun, tasers allow you to keep your distance from the predator or criminal. Similarly, in the case of robbery, you should use a taser to neutralize the threat of the robber advancing towards you.

But in the case of assault or physical tackling, a body-contact stun gun will be more useful to you. Any time that you are physically overpowered, you should go for the open skin or vulnerable body parts. You can use the stun gun on the stomach, groin, neck, or arms to have the most effect. If you get attacked from the front, go for the neck or the chest. If you are tackled from behind or being choked, go for the side of the stomach or the groin or thighs. Either way, a solid jolt from an electric stun gun can cause immense pain and disorientation, which works for the victim to getaway.

Luckily, stun guns are pretty common in the United States and are also legal for self defense. Many civilians carry them to ensure their personal safety. But there has been a gradual evolution of this device becoming commonplace for the masses.

Obviously, the most common occurrence of any such device is the police taser. In riots, protests, chases, and general reprimands, police use tasers on violent people or criminals to subdue them. It is also a good measure to have as a last resort if they don’t have their guns. The police taser, like the one used in the military as well, is a lot sharper and powerful than the regular one. The proper technique of using this taser is taught in every police academy before they’re qualified to use it.

The second one is the type used by forest rangers, hikers, and adventure freaks. These are a little less powerful than most police tasers but they are pretty useful. It helps to have a projectile one in this case to tackle squatters, wild animals, and unforeseen criminal activity in unchartered territories. You can actually find a flashlight with a stun gun so it's useful at night as well.

And then, stun guns are most useful for civilian women against all forms of street crime. With increased crime against women all over the country, self defense weapons like tasers are pretty handy and life-saving. You can find amazing innovative devices shaped as ordinary objects that have hidden tasers in them. Lipsticks, cell phones, rings, pens, and keychains are some of these small objects that have stun guns in them.

Where To Buy Stun Guns Near Me?

Stun guns are pretty easy to find as they are legal and are also used exponentially. You can even find them at your local large supermarket chains and weapons stores. But on the off chance that you can't, look at Knife Import online store for the best collection of stun guns you will ever need. We provide affordable and powerful stun guns to keep everyone safe. 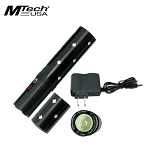