Security and personal safety are important for everyone, be it law enforcement, national defense, or civilian level; everyone wants to keep their city and their country as safe as possible and reduce the risk of crime based accidents. Since there are laws in every state, that maintain decorum and peace, there are also security measures that are taken by law enforcers to ensure the safety of their county, city or town so that people feel safe and protected.

But other than the government’s responsibility, people also like to be cautious themselves and stay armed to tackle any misfortune that might come their way. Self Defense Weapons are not just for professionals; they are, in fact, there to ensure that even someone who lives on their own or with a family can keep their home safe.

Now for starters, let’s look at the instances where self defense weapons are handy and how they are used so you can get a sense of what you need and how you can acquire it. Basically, any legal weapon that lets you defend yourself in emergency situations can qualify as a self defense weapon, but there are definitely some rules and regulations that need to be followed when getting a weapon for personal safety. There are different tiers of threats that require different kinds of weapons, such as follows:

Since the two defense systems of the country, the police and the army, have the most challenging jobs, of tackling crime, violence, and threats every day in their careers, they need to be prepared for the worst. Law officers are trained in active shootings, close combat, reprimand, and crowd control, for which they use compliance tools that can help them neutralize violent situations and deal with all sorts of criminals.

Army officers are trained for a more lethal battlefield where they need to be extra vigilant, so they are also given various self defense weapons that can get them out of difficult situations.

Usually, there is no real need to take the law into one’s own hands, but ordinary people also need to feel safe in their neighborhoods, and when they go around their daily routine. Despite laws in place, there are many instances when calling the police is not an option when you have to defend yourself on the spot to save your life and your valuables.

In those cases, there is a separate selection of personal defense weapons that you can use for your own defense that can help you escape bad situations and also deter any predators or criminals from keeping yourself safe in cases where you are unable to report a crime.

Which are the Best Legal Self Defense Weapons?

He needs to keep yourself safe is understandable and encouraged, but there are apparent considerations involved when you want to get a weapon to protect yourself. Any weapon that is instantly lethal or can be used against you is obviously not a good idea, including any weapon that can be used to commit felony, murder, or theft.

While many people are usually keen to get guns to help themselves, they are actually the least practical of all weapons one can get to keep safe; since they are not easy to use, and they are incredibly unsafe to keep in the house, especially with children. So what are some other legal weapons to carry for self defense that can provide protection?

These are one of the oldest weapons to be used, since the time of ancient Rome. Generally made out of heavy metals like brass, these knuckle dusters were a staple for soldiers and warriors, who used these in close combat to fight their opponents when swords were unavailable.

They were popularized by gladiators and in the modern world have been made common as biker and musician accessories as well as handy self defense tools. Brass knuckles can cause serious muscle disruption and knock someone out while protecting the wearer’s hands from any damage.

This is one of the foremost and effective self defense weapons for women. Pepper sprays are legal everywhere in the United States, and they have proven to be highly efficient in helping people, especially women, escape robberies, assaults, and harassment.

They are also quite handy because they remain on the receiver’s face for at least a few hours, and they can cause temporary blindness that makes the perpetrator easy to find for police and easy to deter for people who want to getaway.

When talking about personal security, the best way to stay on your guard and defend yourself is through carrying hidden self defense weapons. Usually, when an ordinary person goes about their day, they don’t have the wits to carry heavy-duty weapons with them everywhere, but they need to be safe is constant, so that is where a self defense keychain is a best-concealed weapon to have.

These key chains are basically stun guns in disguise that can electrocute anyone who poses a threat, and like the pepper spray, it is quite effective in deterring assault and robbery, since the receiver of the shock is rendered immobile for a long time and it allows you to get away safely.

As mentioned above, a stun gun is one of the handiest weapons to help keep you safe. They are, in fact, proven to be quite effective in crowd control and chasing perpetrators as well, which is why their first popular use was in law enforcement. Police officers still keep stun guns on them as part of their uniform to neutralize dangerous criminals and riots.

There is hardly any police ensemble that is complete without the iconic metal and collapsible plastic rods called batons. A baton is also known as a Billy club in Britain and is used by police officers as compliance weapons to control riots, implicate security detail and use as personal defense weapons against dangerous and violent criminals. They are usually used by law enforcement, but there are many versions of batons available for the general public as well as they are good striking weapons.

They are not only one of the most common tools that are used by the police, but they are also quite handy in detaining someone. While handcuffs are generally used in law and order, there are strong pairs available online and in weapon shops to help you detain someone in accidents if they are drunk to keep them from harming others and themselves.

Where to Find Authentic Self Defense Weapons for Sale

Ensuring personal safety and security of people around you is important; that is why you can search for the best self defense weapon online to get the one that suits you the most, as there are plenty of options from high-quality brands and weapon manufacturers like that create only the most high quality weapons for the appeasement and satisfaction of their customers.

If its immediate action weapons you need then you can get something like the Pepper Attack with Red Cayenne Pepper Spray which will act instantly, or you can also get the Femme Fatale 3.5 Million Volts Rechargeable Stun Gun which is easy to disguise as a phone and use on any predator who comes too close to give them a quick and deadly shock.

For someone with fighting experience, there are some really cool self defense weapons that have more gravitas and more power packed into them. There are plenty of awesome designs in knuckle weapons since they are wearable and can become part of your ensemble, like the intricately carved and melded Green Dragon Zinc Aluminum Hand Knuckle that covers all four knuckles, or the more petite but deadlier Demonic Skull Self Defense Keychain Knuckle which is not only fun to flaunt and wear as an accessory, but it also has sharp edges that can really cause serious damage to someone’s face if they try to hurt you.

This double trouble keychain/knuckle weapon is both easy to carry and quite effective in self defense, so you have style and convenience going hand in hand. There is also a general hesitance when people look for things online, thinking that the quality may not be up to par.

But that is far from the truth, there are various companies like MTech USA, Perfect Point, Zombie Hunter, and Guard Dog that are invested in the personal safety of their customers and they have their products available online so that a maximum number of people can benefit from them and keep themselves and their families safe.

Of course, there are many instances where you may feel danger or fright, but with these personal defense weapons, you can confidently tackle any situation knowing that no matter what happens, you have the means and the tools to defend yourself effectively and maybe help others around you as well. 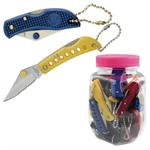 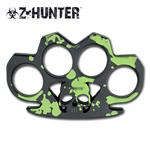