The Incredible Brass Knuckle Knife And Its History

In the world of weapons, there is always something new coming up. But there is a place for classics that can't be replaced by anything else. There are actually really interesting weapons that have only gotten colder over time, like the brass knuckle knife. It is the perfect combination of a punching tool as well as a blade. If you are wondering where the knuckle knife originated, it's again an invention born out of need. It was invented during the First World War when there was actually a need for a weapon for self defense. A lot of fighting happened directly and soldiers needed something to help them fight on the ground.

Knuckle knives were invented for these trenches where they could be gripped well and used in a myriad of ways. It got dubbed the trench knife because that is where it was literally used for the longest time. But after a while, it also became just another weapon and tool that latched onto new meanings and connotations.

The Continued Use Of The Knuckle Duster Knife

After the war ended, there was actually still a lot of use for knuckle knives. They were still used by soldiers as traveling knives because they were always moving about. It was convenient to have one knife that could also perform different cutting functions and it was light to carry. But when you think about the actual knuckle duster knife, it also had a role outside the military.

Due to the dual functionality of the knuckle knife, it was actually a lot more than just a tool. The fact that it also had a knuckle meant greater grip and also additional punching and striking power. Unfortunately, for a long while, the knuckle knife also became affiliated with gang violence as many gangs started using them. But over time, they became more than just menacing weapons.

The shape of the knuckle knife is actually really useful when you need a sharp and handy tool. The knife was also very popular with adventurists and survivalists. The use of the knuckle and the blade was beneficial where there was a lack of other resources. It was used for making firewood, hunting animals to eat, building shelters to stay warm and safe.

Types Of Knuckle Knives You Can Find

Even though the trench knife on its own is a pretty impressive object, it has various versions as well. When you go looking for a brass knuckle knife, you can actually choose from different designs and functions.

The first one you will find is the folding brass knuckle knife which is the common one. When it was invented in the early 1900s, the folding knife was the main idea. It was a blade attached to a knuckle weapon to serve as a self defense tool. The grip of the knuckle and the folding knife meant it was safe to use for the wielder. You could keep your hands from cuts and it was also harder for someone to disarm you with it. With tight control over the weapon, the folding knife provided instant protection and easy carriage when needed.

Nowadays, in advanced design, you can also find spring assisted knuckle knives. Even though they can still be categorized as folding, these are held in place with a spring lock technology. You can flip a button and take the blade out when you need to use it on a moment’s notice. This kind of knife is much swifter and can be wider in blade length as well.

If you are truly looking for something that is a lot more menacing and impressive you can get studded knuckle knives. They are made for punching and slashing at the same time. Such knives are only to be used in extreme rescue missions or self defense where it's necessary. The studs are on the knuckle to be used for punching or breaking down jammed doors. The blade is also sharp and can be used for hunting, butchering, and all sorts of safety issues.

There are so many places to find the right kind of knives, but none more than the knives you have online. In local markets, you might find some good pieces but you might lack variety. In online stores, you can always find the right kind of stuff you are looking for. Here at Knife Import, we make sure that the most unique knives you will ever seek are available to you in one place.

For the best self defense experience, get the Ninja Knuckle Fighter Knife with Sheath. It comes with a cord-wrapped handle as well for a solid grip and stability. The knuckles are descending so they can fit the natural shape of your hands and the knife is also super sharp. The blade is thin and pointed so it can be used for slashing, stabbing, and twisting. Only get this if you have familiarized yourself with the dynamics of proper knife fighting.

But there are also options that work better for survival training and military use. The Mtech USA Fixed Blade Knuckle Handle Tactical Knife is the perfect blade for that. It is a fixed blade with a bigger size so it can cut through the toughest materials and aid in direct combat. This is a specific tanto blade that is much sleeker and can cut deep. It is durable and incredibly useful for survival training as well as fighting when you need it.

The real knife buffs are actually collectors, who like gathering the most unusual knives. They will look for the kind of knives that everyone will talk about. If you also want to find knives that are of supreme quality but won't poke a whole in your wallet, look up wholesale knives at Knife Import. If you want to save a quick buck and also find interesting blades that are worth showing off, this is the place to get them. 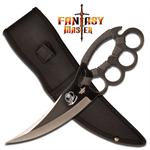 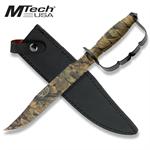