The Charisma Of Movies Swords

When you are engrossed in a certain film, one of the main attractions is the props and weapons. In any good period drama or fantasy film, swords are the highlight weapons for each character. There are so many famous swords that have been invented and featured over the years that are cult favorites now. Among these are some that are popularized by their powers and some by their style. Whichever feature it might be, movie swords are definitely a class apart.

Which Types Of Swords Are Used In Movies?

There are two ways to look at swords as the ultimate best weapons in movies. We often see replicas of swords that were adapted from series, books, and folklore. The other kind are the high-end science fiction versions that are developed through props and CGI. But regardless of the kind of swords that are made, they are all appreciated as merchandise later one. If you want to know the types of movie swords that are actually featured, there are a few popular ones.

Long swords are one of the most famous kinds of swords recreated in films. One prime example would be the Excalibur from King Arthur. It is an amazing historic weapon that has been reimagined time and time again. Then there is also the famous sword from Lord of the Rings that was yielded by Aragorn as the King of Gondor. The deeper you get into fantasy fandoms and historic stories, the more sophisticated the weapons get. On the other hand, there are also more recent ones like the Longclaw from Game of Thrones that became a top collectible as well.

If you look at historic swords, ninja swords are also very famous in this category. From all the Kung Fu drama that infiltrated Hollywood katana swords became really popular as on-screen weapons. The Sai weapon or short swords were also really famous in ninja movies and action flicks. You will also see multiple large daggers in enchanted fairytale films or period dramas like the Mummy. There was also a whole craze around famous movie swords from Conan the Barbarian and Braveheart.

The Attraction Behind Movie Swords

People often like to emulate the violence or the power that comes with yielding swords. When we look at swords as weapons, they become far more intriguing than other weapons. They have a certain grace, grandeur as well as power associated with them. In movies, oftentimes, the most powerful figure usually conquers or uses a sword that asserts their dominance. The whole fantasy around sword movies is also to recreate the same kind of adventure and action that was initiated with these swords.

If you look at the culture of period or action movies, weapons play a very important role in all of them. The thrill is what draws most audiences in and enables them to enjoy the drama that ensues in these films. While there are other genres that are equally important, there is wish fulfillment as well as a sense of justice being exercised in action films. If you look at the best sword movies ever made, they are a battle of good and evil, the common human phenomenon.

Starting from King Arthur and Knights of the Templar, there is history, suspense, honor as well as the religious and cultural significance of swords there. When you move towards fantasy, swords in Lord of the Rings or Game of Thrones also symbolize the shift of power, hierarchy, and magic. In Martial Arts movies, swords represent honor; Enter the Dragon and The Last Samurai are a few films that brought Central Asian culture of swords to life. In their own way, all these sword movies are representing the different symbols and traditions affiliated with these amazing weapons.

Looking For Movie Swords For Sale

Now, when it comes to replicas and collectibles, weapons are one of the most popular film props. Since they are so closely affiliated with movie characters, people love collecting them as memorabilia. Many of these replicas and props sell for hundreds of dollars and are hoarded by collectors of different fandoms. If you are also interested in these amazing movie swords, you’ll be surprised why they are so popular and also available. There are actually shops and avenues where you can get these replica swords from your favorite movies.

While local shops might have some collectibles, there is so much more to explore online. You will find amazing swords in online stores that are high-quality replicas, meant for collection and swapping. Knife Import is one of the most reputable online stores when it comes to buying movie swords for less. We are a wholesale swords enterprise with an impressive stock and amazing replicas. Collectors are always looking for bargains and interesting blades they can get for cheap. In our store, you will find the prices you like as well as the variety.

When looking for cool swords, you need to keep some things in mind. If you are buying for collection, you cannot compromise on quality. You need the replica sword to have just as much grace and stylization as the normal ones as well. There are actually multiple kinds of swords when you look for a collection, finding the ones you like can be a challenge. For the more classic sword lovers, you can get the William Wallace Braveheart Claymore Sword. With original details and high-quality steel finishing, this is the sword to trump any collection. If you are a fantasy nerd, then unique swords are your go-to. You should get the Blade of Frey Elven Short Scimitar Sword. It has an impressive curved blade as well as zinc aluminum accents on the length of the blade. You will love having this in your collection to flaunt and display along with your other movie collectibles.

These and many more movie swords are awaiting you on Knife Import at an incredibly low price. For the collector in you, quality and quantity is equally important, arranged by our vast, online collection. 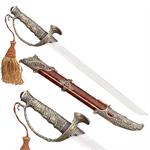