If You Love Ninja Weapons, Here’s all you need To Know!

Yes, it’s official; ninjas aren’t just for geeks anymore! If you are remotely aware of the history of weapons, you will now come to find that real ninja weapons not only exist, but they are insanely popular! If you are a martial arts fan, then you already know what treats lie ahead here! But let’s not get ahead of ourselves. If you are new to the weapon game in general, then Ninja Weapons are a great and exciting place to start. Here you will find all the information you need about the mysterious and fantastic world of ninjas and the weapons that made them famous.

Who Are Ninjas And What Do They Do?

Like all awesome legends, ninjas are also ancient warriors that originated in Central Asia. They were guerilla war soldiers, assassins, and mercenaries who fought against the Shimazu Clan military rule in Okinawa, Japan. They usually fought against the samurai armies that terrorized civilians and ruled over them ruthlessly. The fighting techniques that ninjas used came to be known as ninjutsu, and the technique is still taught in Central Asia and even the United States.

What’s The Difference Between Samurais and Ninjas?

If you are a newbie in the weapon and war world, then you probably have wondered about this at least once. Many people get the two confused, but they are very different. Samurais are official soldiers of the government, whereas the ninjas are more like vigilantes and vagabonds that wok mysteriously.

That is why there are still many myths that surround ninjas and their world. One of the basic distinctions is that samurai work with heavier weapons, and ninjas use convenient and light weapons. The weapons make all the difference in the fighting techniques.

What Are Some Types Of Ninja Weapons?

When you hear the word weapons, automatically one gravitates towards swords, shields, bows, and arrows. The ninja weapons list consists of many of these things as well, but they are on another stealth level entirely! Here are some important and frequently used ninja weapons:

These are also tricking weapons meant to cut the exposed skin; neck, arms, and forehead. If used correctly, these little blades can be deadly.

Since ninjas relied on speed and stealth to do their jobs, this weapon was also common. Along with this, other small katanas were also used, which are flat-edged swords, but shorter than samurai swords.

But being guerilla fighters, ninjas embraced them and used them to counter any strikes from the opposing forces. Nunchucks are weapons of speed and precision, and that’s why they are right up a ninja’s alley.

Ninjas possessed a great presence of mind and reflexes, and they used indigenous wood to make these staffs that became strong weapons. If you know how to use a bo staff, blocking, hitting, poking, and knocking someone out is a piece of cake.

Where to Find Cool Ninja Weapons for Sale?

After going through the list, you surely know why ninjas are such revered figures in history – they are dangerous, and they are cool! They are the ancient version of Batman! If all these ninja weapons have your blood pumping and you’re wondering where you can find ninja weapons for sale, you’ve come to the right place.

Depending on where you live, you can always find antique and modern versions of ninja weapons in your area. There are bound to be some pieces in your local weapon stores or pawn shops. But if you don’t want to go through the hassle of looking from store to store, there’s always the internet! You can find a coolly extensive collection of cheap ninja weapons online in the United States.

That is one of the best things about looking online; you can always compare prices since you have more options. You can search and find styles of ninja weapons that suit your budget and your aesthetics.

Why Should I Buy Ninja Weapons?

It may seem like a waste of time to spend money buying things that belong to a unique craft. That is, however, not the case with ninja weapons. While there may be more emphasis on modern weapons like guns and tasers, ninja weapons can be great personal defense weapons. You can learn basic ninja fighting tactics and keep these ninja weapons at home to defend you against predators and intruders. Survivalists and outdoor adventurists also utilize them.

People worldwide learn ninja fighting in martial arts schools, become stuntmen for films and plays, and as a hobby. These weapons are also popularly used in action films and quite frequently.

If you’d rather let guns and tasers take care of your safety, then know this; they are cool and impressive; start a collection! Weapon collectors specifically like ninja weapons because of their design and aura of mysteriousness. If you want a great showcase, buying collectible weapons is a great way to spend your extra money.

Which Ninja Weapons To Buy And For How Much?

If you are already intrigued by ninja weapons and need to know where to buy the best of them, try online retailers. Knife Import is one such weapon retailer that offers a large and impressive collection of the newest ninja weapons for sale. Here are just a few that could tickle your fancy;

People love collecting traditional weapons for their simplicity and history. If you look up bo staff for sale, you will find various designs in traditionally carved rattan bo staffs that are perfect for use and decoration. Many people don’t know how important they are to the martial arts culture, so they are all the more special.

You can find excellent designs of ninja stars for sale in online shops. If you could get a deluxe Dragon Ninja Star Four Piece Set Perfect Point Throwing Stars for as low as $13.29, why wouldn’t you buy them?

Costing only $5.99, these super cool nunchucks will surely delight a martial arts aficionado and a collector alike. They are made with black lacquered wood of the highest quality. The added chrome studs make these the coolest nunchucks for sale you will find anywhere.

With great designs, there is luxuriousness as well. If you are a collector, then this sai weapon for sale will surely entice you. Packaged in a beautiful red case, this sai sword set is a must-have for martial arts lovers, especially when it costs $14.94 only.

Here is your ultimate guide to all things ninja, so choose what you love and get shopping at affordable prices! 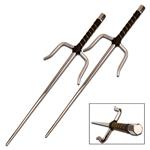