Throwing stars, often called by their Japanese name shuriken, are terrifying ninja weapons for sale available in stores. But we can assure you that they only look dangerous and cool to many people due to their varying number of sharp triangle-shaped blades with even sharper tips. When they are quite hard to inflict a fatal wound from a distance, for more information on the history of throwing stars in today’s world, read our previous blog(s) on the weapon.

As you always should know, Knife Import is the place to be read about and buy wholesale ninja throwing stars along with all other throwing weapons of the famed covert warriors, observed in a historical book or shown in current TV series and movies. It would help if you were rejoicing, for you can buy all Ninja Weapons at a really low wholesale price on the platform.

Ways Throwing Stars Were Used at the Time of Real Ninja

Their delusions have misled people into thinking that ninja stars were used to kill other people in wars and battles. When the truth is quite the opposite. The throwing weapon, shuriken, was supposed only to distract or slightly injure the opponent so that the one using it can make a quick escape.

As you may know, Real Ninja warriors only needed but a fraction of a second to vanish from anyone’s sight. For they were trained since a young age to become one with the darkness and hide in the shadows (or that’s why Hollywood movies say about them).

In actuality, ninja star was just a tool for distraction, and after using it, the highly trained warriors, in the art of stealth, did their best to make a run for a safe place to take cover and strategize a new way of attack.

Are Ninja Stars Lethal for You?

If you have carefully read the above paragraphs, you must already know that these ninja stars cannot be lethal to any person, as long as they are thrown from a distance. However, keep in mind that fatal accidents can happen even while using a non-lethal object. So, don’t think you can start throwing shuriken without any worries.

People have started buying throwing knives for sale in stores near them, purely for recreational purposes. The same is the case with these well-known ninja throwing stars that are being bought in huge numbers to be used for playing games with, displaying, and/or practicing throwing weapons.

Differences Between How You Throw Throwing Stars and Knives

Most weapons that are flung towards an opponent do not differ from one another, only in ways where you can have a better grip. For example, the best way to hold throwing knives will never be the same as the proper way to hold a ninja star because the weapon’s whole design is different.

However, the precautions remain the same for both real throwing stars and knives, which are as follows:

Did Only the Ninja Use Throwing Stars?

Contrary to popular belief, back in Japan's feudal era, the shuriken was not only used by real ninja but samurai warriors as well. However, the first use of a similar weapon can be linked back to some time in over a millennium, way before the time of ninja or the samurai.

While both types of Japanese warriors used the throwing stars, the way they utilized it was completely different. Talking about the ninja, they used this weapon silently, without being noticed, so their opponents felt cut by a bodiless entity. This could scare anyone; it’s not just us thinking like that, right?

The shuriken for sale, you can find in markets nowadays, was mainly used for surprising the enemy and only scaring them into thinking that these lightweight and small throwing weapons could kill. When in reality, they were unconventional for such use.

At the end of this blog, we hope that you understand that throwing stars are not lethal. It was just a mind trick played, or a rumor spread out, by the real ninja to scare and disorientate their enemies. Also, to read more informative and interesting blogs related to wholesale knives, swords, and daggers, keep visiting our website regularly. Thanks for visiting! 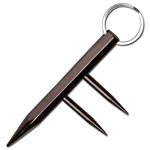