Are Spring Assisted Knives Better Than Other Knives?

If there is one tool that has been around the longest and most useful, it’s the knife. There are so many ways to utilize it and make your life easier. But when it comes to exploring the different types of knives, we are spoilt for choice. You can literally look through your local market and realize knives are a whole section of tools on their own. On top of that, within this section, you will find subcategories that are even more specifically designed. For many people, the idea of knives doesn't extend beyond the kitchen. But that is not the only way they come in handy. Most people will think, are spring assisted knives better than other knives? If you consider the fact that spring assisted knives actually do have a faster and sharper function, then yes. They are built for quick use and are designed to be handy and convenient wherever you might need them.

The whole idea of why spring assisted knives to exist is to improve upon an already sophisticated tool. The knife as it is can be used for cutting, snapping, curling, carving, slashing, and whatnot. When you add the idea of speed and safety to it, it becomes even more compelling. The mechanism of the spring knife, as the name suggests, has a folding blade that is held together by a spring lock. It has a button that releases the blade in a quick flick and opens the blade. You can also just as easily close it back when you are done using the blade. The second thing is that for a proper blade to be functional and safe, it has to be small as well. Almost all spring knives are also ideally between 3 to 3.5 inches in blade length. That also makes them handy and easily manageable when you are using them every day.

You would think that something as easily weaponized as knives would pose more of a threat. Even though knives are still pretty much-considered weapons, they are also really helpful. There is a grey area when it comes to how the law would regulate knives. In the United States, there is a federal law that prohibits the use of knives larger than 3.5 inches in blade length in public. But blades shorter than that are considered fit for personal use and are often considered more as tools. In addition to that, spring knives are also legal for purchase and sale, all over the country.

You might want to look into state laws where you are living to see if you are allowed to use them. There are some states like California, where it is a crime to disguise or conceal a blade. But on the other hand, there are also states like Washington and North Carolina where public use is restricted. You can still be charged with possession with intent to intimidate in many states. You need to make sure, if you do use a spring assisted knife, you are responsible for it and careful as well.

The Possibilities Of Using Pocket Knives

For anyone who has not used pocket knives before, the idea of using them in daily life is absurd. We have also been conditioned by films to believe they are dangerous and criminal. But you might be surprised that pocket knives were more than just weapons, from the start.

They were initially created for the army so soldiers could have personal defense weapons as a last resort. But beyond that, they were specifically engineered to have built-in tools to make their lives easier. Since soldiers moved around and packed light, these knives had parcel carriers, utensils, cutters, and hooks. Over time, these knives became more about convenience than fighting and remain that way even now.

Now, you will find much use for pocket knives that have nothing to do with violence at all. It is established, they are still pretty good for self-defense, but equally useful for rescue and survival.

It’s hard to imagine trudging around in the woods without a few tools to rely on. Since camping trips are also really intense and require a lot of innovation, pocket knives are perfect. They come with multiple tools and can be used for cooking and foraging herbs and fruits. They also assist in propping tents and hammocks by cutting ropes and digging holes. You can also use them to cut twigs to make kindling for the fire to keep warm and cook food.

With small blade knives, it is easier to swirl around and play around with them a little bit. Even though that is the last thing you should do with knives, there are people who train to do tricks and throw knives. These are often done at parties, carnivals, performances, and done by professionals. Pocket-sized cool knives are often one of the knives that are used for entertainment.

As pocket knives are nifty little tools, they are also really helpful for small repairs. Be it cars or electrical issues around the house, they can cut wires, screw bolts, and also clean rust. You will find multiple pocket knives that have screwdrivers and cutters to make small repairs easier.

The usefulness of knives can never be credited enough, none more so than first aid. Almost all first responders, EMTs, and firefighters carry pocket knives with them to help in their jobs. A pocket knife is good for cutting seat belts off car crash victims. It is also useful for making bandages out of cloth and cleaning wounds. Firefighters use them to extract fire extinguishers and also use LEDs built in to navigate in the smoke.

Whether they are in regular usage or not, pocket knives are pretty cool and worth buying. You can actually find an extensive collection of them online as opposed to the local market. To find reasonably priced knives and more options, check out wholesale knives in bulk at Knife Import. Payless for the same kind of quality which you would get anywhere else and superior choices. 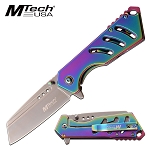