Ancient Martial Arts Favourite - What is a Ninja Star and where can you find it?

The most die-hard fans of martial arts movies and culture know what Ninja Star is, but for those of you don’t know yet, Ninja stars are often known as decoy weapons that are meant to distract someone. They are typically 5-point or 4 point, star shaped blades that look like metallic snowflakes. They are also seen as a staple for ninja fighters who are trained in traditional guerilla warfare, but they actually have different origins.

Real throwing stars are part of the military Samurai culture from Japan, where they use them to hit someone from a distance, to aim for the throat or open arteries, so they are weapons of killing. They originated from a fighting style called shurikenjutsu, popular among Okinawan soldiers. Improvised versions of the shuriken or throwing stars were made by other people and were later also taught in other martial arts techniques like ninja warfare.

While it is Actually Illegal to Carry Throwing Stars

If you are interested in learning ancient martial arts techniques, they are still taught mostly in Central Asia as well as the U.S., and you can find these in weapon shops, and of course, online. While it is actually illegal to carry throwing stars since they are considered to be assassin weapons, there is actually no rule against selling them, so if you are interested in getting one, make sure you don’t carry them to friendly social gatherings where they might spoil the mood.

Other than that, there is actually a surprisingly large collection of Chinese throwing stars online where you can get both customized as well as decorative ninja stars for collecting and for training. Since they are such a specialized novelty item, there are many designs available online which are perfect for collecting, but the best part is that they are all functioning and can be used for personal defense if you know how to use them.

What are Ninja Weapons Used For?

Just as there are hundreds of other weapons that were used to fight and defend, the ideal ninja star is also used to fight; it gives the user an advantage of distance and stealth to attack their enemy. As they are small and incredibly slim, so they can be whipped through the air, and with good aim, can be extremely potent in personal defense. Although they were not originally supposed to be killing weapons, because they were used to confuse the opponent; one could throw a ninja star which would hit an exposed part of the opponent’s body, like arms, face or feet, and disappear, which would give the thrower an advantage in weakening the enemies focus and defenses. Their stealth is what got them associated with ninjas eventually.

It is like the central Asian version of poison darts, except the poison is the speed and pain that the sharp edges of the throwing star can cause, and the objective is to disarm, eliminate and control the danger of any kind, usually an impending assault or attack. There is little that can be said about why they were made because throwing stars were a secret weapon that later became popularized. But some there are significant ways to throw a shuriken, and there are different combinations of these techniques that are still taught.

For this technique, the blade of the throwing star should not before it hits the target that entails that the weapon hits as swiftly and quickly with no delay.

The other way is where the throwing star has to spin in order to hit the target, causing a different kind of impact and pain.

Although these stars are also used like arrows or darts for target practice, they can be lethal, both throwing methods are dangerous; throwing stars are killing weapons that should be learned with caution and prior knowledge. This is why they should not be used without proper training as they can be harmful to you and the people around you. And they should definitely not be used recreationally.

Is it Possible to Find High Quality Ninja Stars for Sale?

It is definitely possible to find ninja throwing stars for sale, and for quite reasonable prices as well. Since they are a novelty item, they are definitely preferred by people who train with throwing stars or those who like to collect them as flashy weapons. In both cases, quality is a definitive marker of why they are bought; a clumsily made throwing star is useless for throwing and not ideal as a collectible either. One of the most common types of these ninja stars that are preferred are metal throwing stars that are super sleek and sharp in design and make, and that can be used with speed.

Metal is also the most lethal form for a blade, and for those of you who want to train in the martial arts and need to know the exact way of using them, you will need a high quality item like the expertly crafted 6-Point Silver Stainless Steel Throwing Star that is sharp and made of pure steel that can also cut swiftly. But before you go onto flinging throwing stars everywhere, it is a good idea that you get familiar with the throwing techniques and learn the rules to avoid accidents. For this purpose, you can also find practice throwing stars like 4.5 Inch Practice Molder Rubber Ninja Throwing Star that will help you improve your aim and throwing tactics before you buy a real ninja star.

When it comes to cool weapons, there are real and online stores that will spoil you for choice. Whether you prefer to makeover design or color over sobriety, there is an extensive collection of weapons you can find, and with something as impressive as a ninja star, cool design is not hard to find.

If it is color and flashiness that you want in your collectible ninja star, then something like the 6-Point Rainbow Stainless Steel Throwing Star is perfect for you. It not only comes with a pouch that will keep it clean and protected from wear and tear, but it is also a colorful sample of you can play with aesthetic even in dangerous looking weapons.

But color is not everything when it comes to a collection, of course, so there always has to be variety, and that is where something like the 4-Piece 2-Tone Black Stainless Steel Assorted Throwing Stars Set is the better option. It is not a good bargain to buy a collection of throwing stars rather than one by one, but this set also has different designs and point shapes that will add a little diversity to your collection.

There is hardly any collection that is complete without a theme and backstory. So to emphasize a theme in your collection, you can get the 6-Point Black Dragon Throwing Star that has intricate Chinese words engraved on each point in red against a dark black background. Nothing speaks awesome collection like a little blade engraving that will hold the attention of anyone.

What the Price? Affordable Ninja Weapons for Sale

Whether you use weapons for sport or training or as show-pieces, one of the obvious concerns is affordability. Weapons are made with high-quality metals and other expensive materials, and it can be challenging to find what you like within the price that you want. But with the pieces mentioned above and more options, price is not a matter of concern as they are still high quality ninja weapons for sale, which are available at extremely competitive prices.

Typically the price of a single nice throwing star can vary from somewhere from $3 to $10, and there are hundreds of different shapes and designs that you can find in this range like the 5-Point Black Titanium Coated Throwing Star, complete with a pouch for only $4.99. For avid collectors, quantity is also a concern which is where there are also sets of throwing stars available like the American Flag Ninja Star Four Piece Set for $10.69, or the even more awesome yet simple, Perfect Point 2 Tone Blade Throwing Stars Set with Blue and Red Cords for the amazing price of $8.09 only.

How to Use Ninja Star

So what are you waiting for? Now that you have this complete guide on how to use a ninja star and where you can find the best ones, you can get that perfect piece that will fit the use that you want to make out of it. There are variable colors and designs available in fancy and somber ninja stars that are great for ornamentation, as well as actual training. If you are looking to start a collection, ninja stars are definitely high on the list of preferred weapons that have been favoured by martial arts fans for their impeccable designs and flawless finish as well as movie buffs that have fond associations with the famous throwing star weapon. 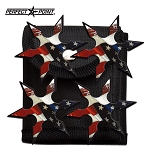