The myth about real ninja being covert operatives or just plain old assassins is still to be proven. However, after taking a look at all the brutal and cool Ninja Weapons we have compiled in a list for this blog, you might assume the latter to be true. We want to tell you that they used different concoctions to make fast-acting poisons, with which most of the real ninja weapons were covered to give fatal wounds even if the ninjas were only able to inflict a scratch on their enemy’s body.

As we have included some hazardous and deadly items on our list, so you can say not all of them are available for sale in stores. This means that you might not be able to find them on KnifeImport.com as we only offer those ninja weapons for sale that are allowed to sell, buy, keep, and carry under various US state laws.

But the notable thing about Knife Import is that all the ninja weapons, which we are offering for sale, are available at wholesale prices. So, if you are looking for one or many good and cheap ninja weapons, then you should take a look around our online store for all kinds of ninja and martial arts weapons up for sale at really reasonable wholesale rates.

We guess it’s time to discuss the list of real ninja weapons we have made for our readers. Otherwise, you will end up browsing our inventory and buying the cheap but cool knives for sale on our website. So, let’s do this— Nin! Nin!

Often regarded as the ninja star in the US, a shuriken is a star-shaped weapon that can be held like a throwing card between your forefinger and thumb. Ninja mastered throwing stars so they could hit any target with a quick sidearm or overhand spinning motion. One of the coolest weapons in a real ninja’s arsenal was not deadly enough until the blades were dipped in poison or used to cut major arteries.

These are two different types of ninja weapons, while Manrikigusari is used for all sorts of things such as whipping, throwing, and/or strangulation. Its design is quite similar to ninja nunchucks, which are not included in the list as they are on the lesser end of the deadly weapons, as both weapons have weights at the ends of a single chain.

Similarly, a kusarigama is a cross of ninja weapons like the kama and manikin-gusari. As you may know, a kama is a miniature scythe that was initially a farmer’s tool. Now, they can be used as single or twin ninja weapons to increase their effectiveness.

The literal meaning of the weapon’s name Neko Te is Cat Hand (or claw). Anyhow it's an iron glove with sharp claws and spikes all over it. Highly favored by real female ninja, the Neko te was dipped in poison to subdue targets once and forever.

Another ninja weapon in our list was often dipped in poison to deliver fatal wounds. However, it was just a small finger ring with sharp tips that could be hidden within its wearer's hand. Kakute was revealed suddenly to rip the skin or stab the enemy to leave him/her to their fate. If the real ninja wore the ring with spike facing outside, they could use it as we use the modern-day brass knuckle keychain to injure their enemy’s sensitive body parts such as eyes, ears, and throat if it was laced with poison, then putting a permanent end to their enemies as possible!

The ninja blowgun was named fukiya, a mid-range weapon given its propulsion source was the user’s breath. Anyhow, they were often used in the form of harmless-looking flutes but proved deadly for many people after getting hit with the surprise attacks from these hidden ninja weapons.

One of the favorite weapons among ninja, the kunai knives, were small, lightweight, easily conceivable, and sharp enough to be the perfect throwing knives. However, they have become trendy among the common folk due to their excessive use in the Japanese anime Naruto.

For most people, this might be a strange weapon to add to this list as it's embedded into the soul and flesh of the Japanese samurai. Still, ninja warriors used to fight with a katana sword, and there is nothing anyone can do about it. As in Japan's feudal era, katana for sale were made in abundance for the samurai, which helped the covert assassins or operatives of that time fight using their enemy’s weapons.

If you have reached the end of the list, you must have read about cool swords, knives, and various other unique ninja weapons that only they used. We are extremely glad to have provided this fun blog and hope that you have enjoyed reading about different cool ninja weapons used by the actual covert warriors of that era.

As we have mentioned, you can find only a few of these ninja weapons for sale in markets or stores near you because the rest are too dangerous to be mass-produced for the general public in today’s world. For more interesting and informational blogs on real ninja and samurai weapons, please keep visiting our platform daily. See you next time! 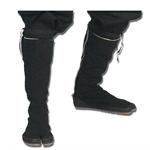 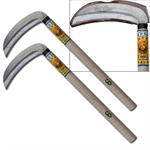